In March, CHIRLA and its partners kept the focus on passing comprehensive immigration reform, the enacted FY 22 bill, the release of the President's budget for FY 23, and executive action--what the President can do on his own. We believe the moment for immigration reform is NOW, and Democrats have until September 30 to deliver on citizenship using reconciliation. They must not abandon this powerful tool to include immigrant communities in President Biden's plan for Building a Better America.

The road to American economic growth passes through immigration reform: a path to citizenship for the 10.5 million undocumented immigrants in the United States would boost our gross domestic product (GDP) by $1.7 trillion over 10 years, creating almost 440,000 new jobs, according to the Center for American Progress. This is why we continue to push. Please read on!

FEDERAL UPDATE
Value our Families Week of Action
Starting March 7, CHIRLA members participated in a virtual week of action sponsored by Value Our Families, a national coalition to protect and strengthen the family immigration system.

Our members met with Sens. Dianne Feinstein and Alex Padilla of California, as well as Rep. Joaquin Castro (TX 20). They pushed to modernize family immigration and reunite more than 4 million people separated from their families in the United States by a visa backlog and a system that does not recapture unused visas from previous years. 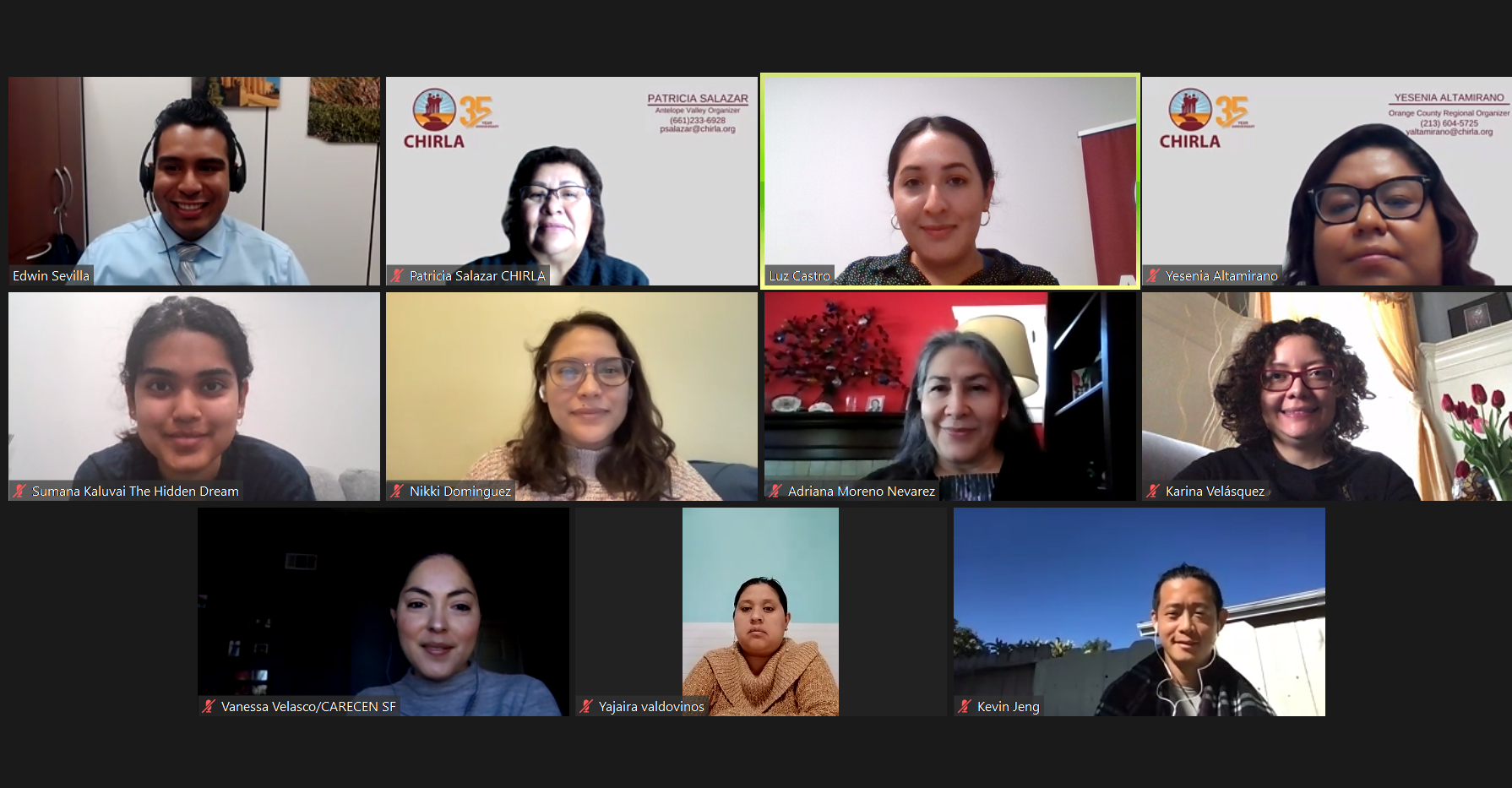 CHIRLA members met with staff from Sen. Feinstein's office as part of the VOF Week of Action.

Appropriations
On March 15, Congress passed and President Biden signed a $1.5 trillion federal spending package, which will serve until September 30, when FY 2022 ends. See our analysis.

We welcomed the increase to $20 million for the USCIS Citizenship and Integration Grant program, an ask that CHIRLA and its partners made. As long as it has existed, Congress has funded this grant at $10 million. Because we received a grant in 2021 under this program, we know that figure is not enough to make citizens of the 9 million eligible permanent residents that could qualify.

We also saw healthy budget hikes for federally funded Pell grants and college prep programs, but they continue to leave out DACA holders and undocumented students. Congress must open the college doors to all students, regardless of immigration status.

ICE and CBP funding levels for border enforcement that separates families remain roughly the same. They do not reflect the needs of immigrant families, which include legal representation in immigration court, which was zeroed out. This representation is crucial for vulnerable immigrants who can't afford to pay their own lawyer, and it protects their right to due process. We continue to push to increase this funding at the local and federal level, so we can protect what we consider a constitutional right.

The final funding bill also did not include money to recapture diversity visas and green cards lost to Trump's Muslim ban and COVID-19. This was a big disappointment. Still, we look to FY 2023 and we anticipate working with our friends in Congress to ensure that budget reflects immigrant priorities that would make of this a more welcoming nation.

Our ever-present goals for FY 23 ask the government to spend less money on enforcement/detention and more money on programs that lift access to justice and citizenship. We will release our full list of priorities for FY 23 in mid-April.

Senate Subcommittee Hearing on Immigration
Also on March 15, California Sen. Alex Padilla chaired a hearing of the the Senate's judiciary subcommittee on immigration, featuring testimony from a young immigrant with no options to stay after she finishes her education.

Padilla also expressed frustration at the broken system. "Our immigration laws are outdated and no longer serve the purpose for which they were created," he said. "Reforming our family, employment, and diversity systems would be in the best interest of our economy and our communities."

CHIRLA submitted a statement for the record. We urge Congress to act this year, and in this Congress, using all available means, to strengthen our immigration system and enact a path to citizenship for all undocumented families suffering because of the barriers addressed in this hearing.

Title 42
On March 4, the DC Circuit Court of Appeals unanimously ruled in Huisha-Huisha v. Mayorkas that the U.S. government cannot expel families to places where they face persecution/torture. The ruling partially restored a lower court block. But later that day, a federal district court in Texas ruled in State of Texas v. Biden that the U.S. government must expel unaccompanied children previously protected by first a court injunction in 2020 and then by the Biden administration in 2021.

On March 11, the Centers for Disease Control and Prevention (CDC) responded to the March 4 court order. It ended Title 42 for these children, recognizing the "unique vulnerabilities" of unaccompanied minors and concluding that their expulsion is not warranted to protect the public health. Later, DHS specifically reminded Border Patrol agents that Ukrainians fleeing the Russian invasion of their country could be exempted from Title 42.

We welcomed the new exemptions, but continued to press our belief that the Biden administration must end Title 42 once and for all, joining a strongly worded sign-on letter on March 23.

On April 1, we heard from the CDC the words we've been waiting for: Title 42 will end on May 23. We will ensure this happens even as we keep pushing to reinstate asylum rights for those expelled up to that date. Anti-immigrant members of Congress and their supporters started a lawsuit/legislative campaign to keep using this racist policy. We look forward to holding them accountable. Read our statement.

Remain in Mexico (MPP)
The Biden administration continues to enact the Migrant Protection Protocols (MPP, or Remain in Mexico) to comply with yet another misguided court order following attack lawsuits from states like Texas and Ohio to bar anything that might help immigrants.

MPP 2.0, the modified version, continues to turn away immigrants at the border, forcing them into shantytown shelters to await some future court date. Even those with clear cases of persecution cannot make their case and get sent back to face danger. MPP, like the bully policy Title 42, must end now, and the Biden administration must once again honor the right to seek asylum.

CHIRLA joined an amicus brief to the U.S. Supreme Court supporting Biden's efforts to overrule a district court’s order in Biden v. Texas. Oral arguments in that case are scheduled for April 26. A ruling in that case, expected in June or July, could determine the future of MPP.

STATE UPDATE
Celebrating Women
CHIRLA congratulates and celebrates Justice Patricia Guerrero, who was sworn into the California Supreme Court on March 28 as the first Latina justice on our state’s highest court.

Relief for high gas prices
Governor Newsom's gas price relief package targets registered vehicle owners, and that means undocumented immigrants are included in the program! Newsom's proposal to send up to $800 dollars of gas relief money to Californians has no major constraints around immigration status. In the past, government stimulus dollars have only allowed for immigrants with ITINs to benefit.

Thanks to AB 60 (Driver’s licenses for All), passed in 2013, more than 1 million of our undocumented neighbors have been able to get driver licenses, and now they may qualify for this relief through their vehicle registration. This is a good template for the way California can ensure benefits reach all residents of our state. CHIRLA calls on the Legislature to approve this proposal structure and use it as a model in the future.

CHIRLA's State Agenda
Here are a few of the bills that form part of CHIRLA's Blueprint for the Golden Promise agenda:

REGIONAL UPDATE
Los Angeles County
Immigrants Are LA: On April 5, the Immigrants Are LA campaign held a press conference to announce the priorities they want the Board of Supervisors to focus on for Round 2 of American Rescue Plan funding, as determined by a county-wide survey. They are:

City of Los Angeles
Los Angeles Justice Fund: CHIRLA continues to lead advocacy regarding the next phase of the Los Angeles Justice Fund. We want to end the pre-conditions that bar those who have had brushes with the law from qualifying for this crucial representation. The Council has yet to disburse FY 22 funding, and it expires on June 30. Without the $2 million that the city committed, the program will have to cut services by 25%.

On March 8, CHIRLA, CARECEN, and Immigrant Defenders, the organizations that provide attorneys to the LAJF, hosted a press conference and led a meeting a meeting with Councilmember Monica Rodriguez to try to keep the pre-conditions, called criminal bars, out of the program. 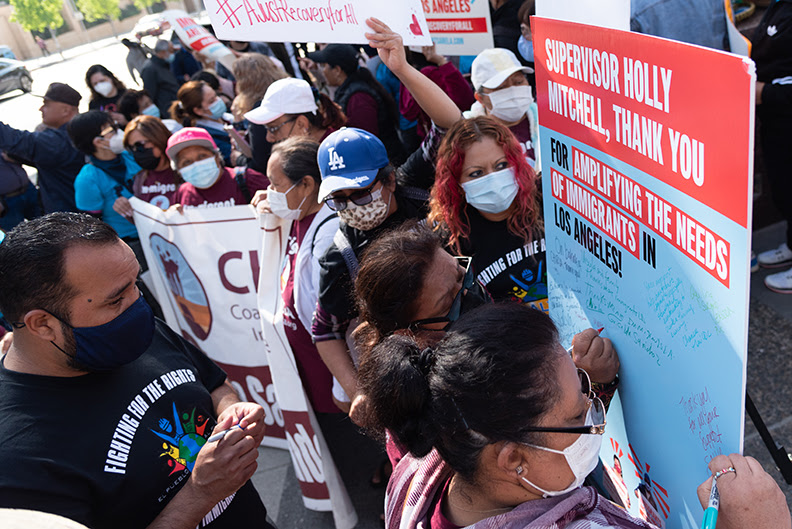 Members from CHIRLA and partners sign a card thanking Sup. Holly Mitchell for her support at the Immigrants Are LA press conference. 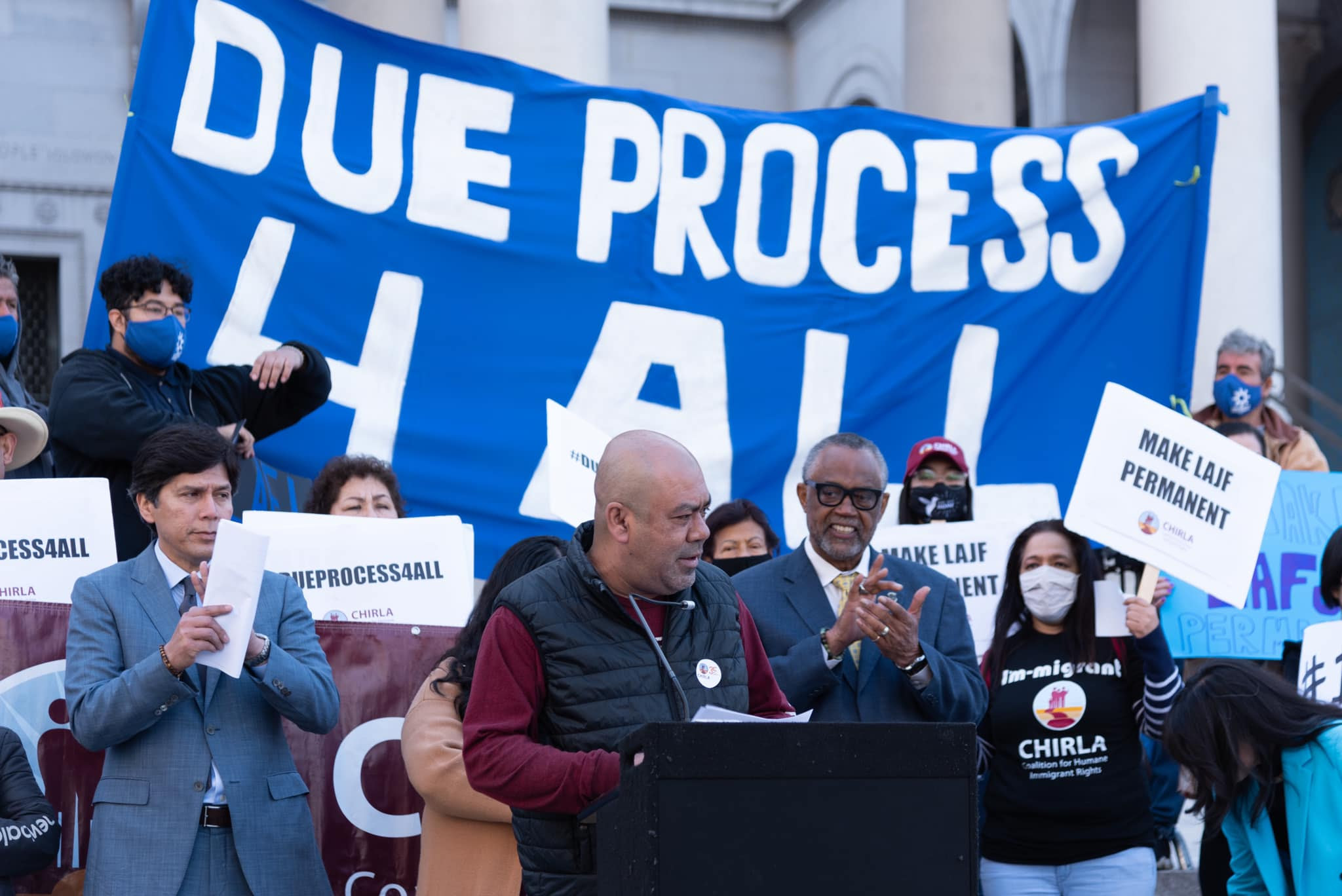 Nevertheless, the budget committee on March 21 voted to expand the criminal bars, excluding more of our immigrant neighbors from the program. The full council votes next. We demand they remove the pre-conditions and support stronger protections of immigrants' right to due process. Join us: send an email telling the City Council to protect the original mandate of the LAJF. Thank you!

LA Metro
in his testimony to the Metro Board of Directors in late February and early March, Kenneth Hernandez, the new chief safety officer at LA Metro, revealed that the transit agency has proposed a predictive policing intelligence-gathering program called Reimagining Public Safety. Hernandez said this program would harm and discriminate against low-income riders of color on Metro.

These Angeleno riders already bear disproportionate punishment from the criminal law system. Despite the Metro Board’s directive to shift funds to non-police alternatives, 68% of Metro’s proposed FY23 public safety budget, $218 million, will fund law enforcement and security personnel in the proposed model, which we consider racially biased. CHIRLA joined the Alliance for Community Transit Los Angeles (ACT-LA) to urge the Metro Board of Directors to scrap this program. Read the letter here.

Los Angeles Unified School District
On March 21, we met with LAUSD Board Member Nick Melvoin to discuss the challenges immigrant youth face in our schools. We gave him feedback on his recent initiatives. But we did not stop there:

LAUSD Board President meets with WiseUp!: On March 17, Board President Kelly Gonez met with CHIRLA Executive Director Angelica Salas, students from CHIRLA's WiseUp! high school organizing project, and policy team members to learn more about the experiences of immigrant youth and their families.

LAUSD Superintendent meets with WiseUp!: On March 26, WiseUp! students, Ms. Salas and policy team members also met with Alberto Carvalho, the recently inaugurated superintendent of the Los Angeles Unified School District. In an incredibly engaged meeting, Carvalho told them about his personal immigrant experience and his journey to leadership, as well as his commitment to making ours a school system that supports immigrant students and families well and equitably.

For the first time since WiseUp!'s founding in 1999, the superintendent of California's largest school system, the second largest in the nation, came to their headquarters in person and listened to their concerns. On behalf of students and community across Los Angeles, CHIRLA asks Superintendent Carvalho and the Board of Education to:

We look forward to working with Superintendent Carvalho and the LAUSD Board of Education to protect immigrant families.

Thank you for your attention!