In April, federal and state budget appropriations dominated CHIRLA's work for immigrants. At the federal level, we worked hard to ensure the FY23 bill includes immigration priorities. We know that nothing happens without a budget in government. How and where the dollars get spent is a reflection of Congress's priorities and vision for our nation. We also  haven't forgotten about reconciliation as a chance for Democrats to pass a path to citizenship for the 11 million. In California government, we continue to press our Blueprint for the Golden Promise agenda that eases immigrant access to equity. Locally, we are laser focused on appropriations for the LA Justice Fund and local funds from the American Recovery Plan. Please read on!

FEDERAL UPDATE
Yes to Citizenship
On April 15, ahead of Tax Day, CHIRLA participated in a Congressional briefing with Make the Road and the Immigration Research Initiative about immigrants' contributions. Undocumented immigrants pay billions into federal, state and local coffers, but cannot qualify for most benefits, including Social Security and even stimulus checks to offset COVID-19. Watch briefing.

On April 27, Angelica Salas, CHIRLA executive director, traveled to Washington D.C. to meet with House Speaker Nancy Pelosi, California Senator Alex Padilla, and the staff of New Jersey Senator Robert Menendez to discuss how immigrants may still get access to legal status this year. She described CHIRLA’s multi-prong approach, which includes a revived reconciliation package, appropriations that include immigrant priorities, or stand-alone immigration bills that set a path to citizenship, each alone or in combination. 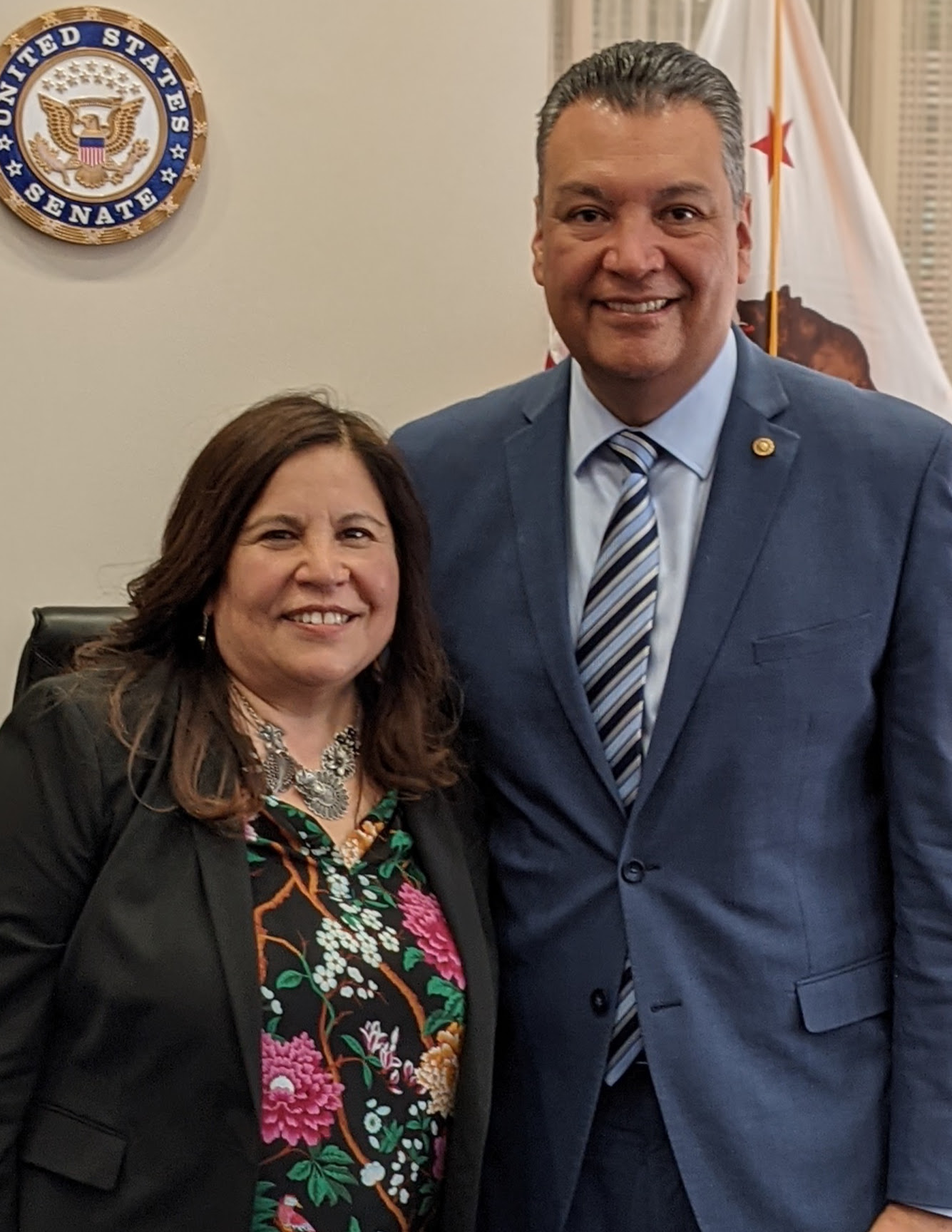 Our constant call to members of Congress: consider the federal budget a moral document that reflects the nation's priorities and values. This mean investing in people. It means promoting dignity, justice and integration of immigrants. And it means defunding programs and agencies that do the opposite.

Hearings: On April 16, the Homeland Security Subcommittee heard USCIS' FY23 budget request. Director Ur Jaddou spoke of improving the system by clearing visa backlogs and reducing processing time for applications. USCIS has about 8.5 million pending cases, and of those, about 5.3 million have been pending longer than their own estimated, published ranges. Director Jaddou wants to:

On April 27-28, DHS Secretary Alejandro Mayorkas appeared in hearings conducted by the House Appropriations Subcommittee on Homeland Security, the House Judiciary Committee and the House Homeland Security Committee. In response to increasingly personal attacks by Republican committee members who seemed uninterested in his answers, Secretary Mayorkas discussed the President’s proposed FY23 Homeland Security budget, oversight at DHS, and Title 42. CHIRLA’s live commentary pushed back with facts against false claims about immigrants and "open borders" while pressing for a path to citizenship and a more just immigration system.

On April 28, the Subcommittee on Labor, Health and Human Services, Education, and Related Agencies held a hearing on the Department of Education request. Education Secretary Miguel Cardona urged investments to help students pursue higher education and pay for it. The administration wants to expand federal student aid and double the maximum Pell grant by 2029, also opening it to DACA holders.

Universal representation: On April 26, CHIRLA joined the Veral Institute for Justice and the National Partnership for New Americans to launch the Fairness to Freedom/Universal Representation Campaign, pushing for legislation establishing a universal right to federally funded legal representation for anyone facing deportation, regardless of who they are, where they come from, or what they can afford.

“In addition to the cruel enforcement measures that break up families in the thousands on a daily basis, our nation's immigration justice system is nowhere near being just or fair to our community," Ms. Salas said. "This is why we need this campaign, which would build on the work already done in California and a few other states. We need action by Congress now."

STATE UPDATE
CHIRLA's State Agenda
Here are a few updates on bills that form part of CHIRLA's Blueprint for the Golden Promise:

One more reason to celebrate May Day: Healthcare for all CA seniors
Sunday May 1, 2022 marked the first day that eligible seniors, 50 years of age and older could enroll in full-scope Medi-Cal, regardless of immigration status. CHIRLA celebrated accordingly, marching in the streets for May Day and spreading the word about the new law. St. John's Well Child and Family Clinics were also on the scene, answering questions about the new law and providing COVID-19 boosters!

City of Los Angeles
On April 13, Councilmember Curren Price Jr., a long-time ally and champion for immigrant Angelenos, announced the allocation of $1.25 million dollars for CHIRLA, CARECEN, and BAJI to provide immigration legal services, outreach, and education for immigrant families in Council District 9. Thank you, Councilmember Price for your solidarity and commitment to fighting for a Los Angeles that recognizes the humanity and needs of immigrant neighbors!

Los Angeles Justice Fund: The Board of Supervisors and philanthropic organizations have approved and are ready to enact a framework that includes all immigrants. They expect to launch the next iteration of the program by mid-May. But CHIRLA and its partners are still pressing the City Council to approve a framework for its part of the program that contains no criminal carve-outs. We are also working for the disbursement of the $2 million allocation for FY22 before June 30, the end of the fiscal year. 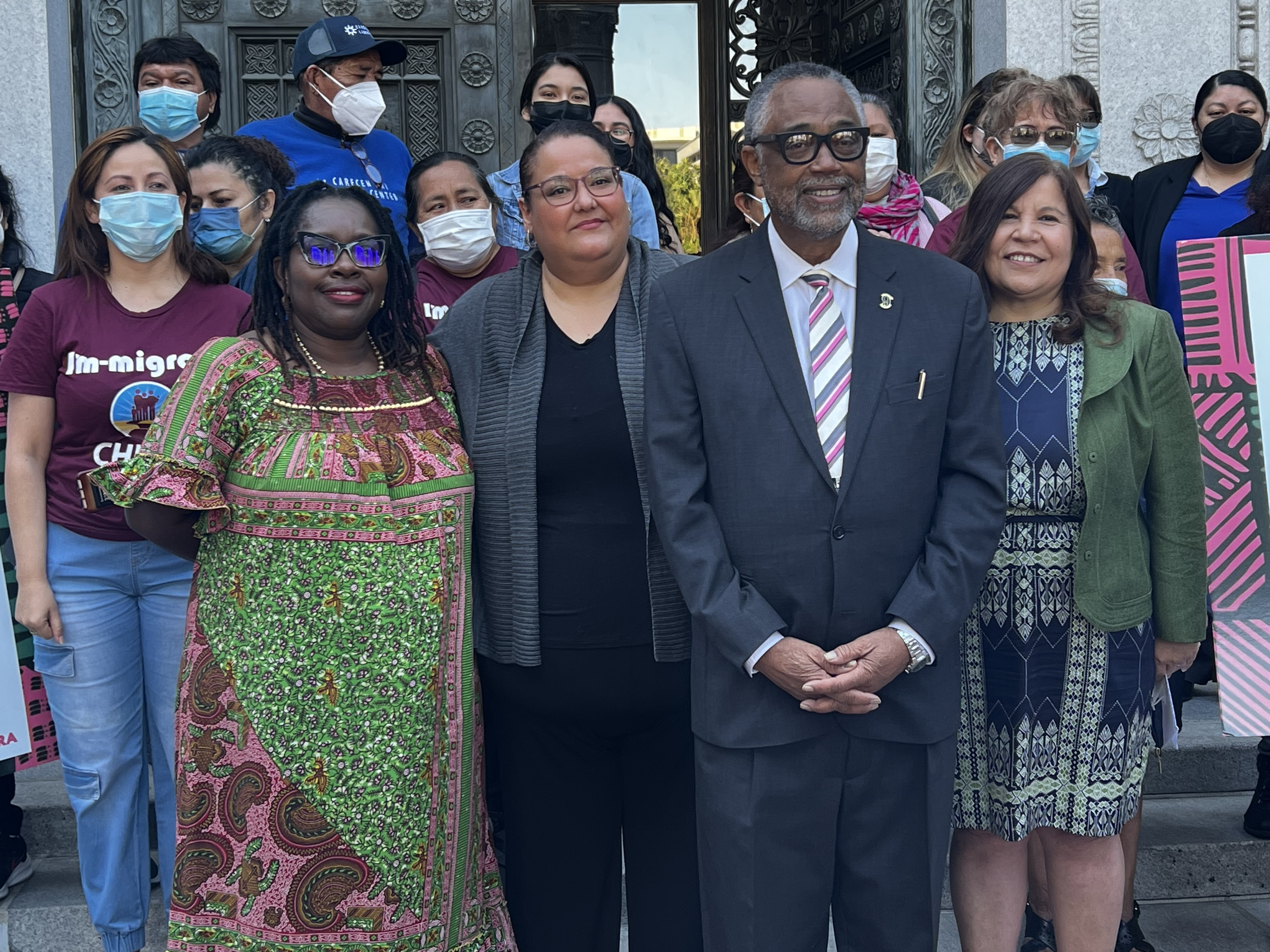 City redistricting commission: CHIRLA joined Common Cause, Advance Project California, and Asian Americans Advancing Justice in support of a City Charter amendment for the November ballot that creates an independent redistricting commission. Councilmembers Nithya Raman and Paul Krekorian introduced the idea in December, but the council has not acted. An independent redistricting body would make the process more equitable and transparent, expanding the electoral power of immigrants and Latinos across the city.

Thank you for your attention!